The TV Expert
Home Reviews VIZIO D40u-D1: What You Need to Know Before You Buy

The VIZIO D40u-D1 is a fairly inexpensive smart TV with a 4K, or 2160p, display resolution. It is nearly 40 inches wide and close to 25 inches tall. With wireless and Ethernet connections, it is easy to set up with your home internet connection. Apps available within the TV itself are most of the major entertainment subscription providers like Hulu, Netflix, YouTube and Vudu.

It comes with a one-year warranty and is Energy Star certified with Energy Star version 7.0. It has three HDMI ports for connecting gaming devices, streaming devices or other kinds of movie players. There is USB connectivity for flash drive content, and you can use it to show off photos as well. This TV is in VIZIO ’s D series which is much less expensive than the M series they had previously released but very similar to the M series in a lot of ways.

The VIZIO D40u-D1 boasts capabilities and features that are hard to find in a television of the same price elsewhere. However, not all features function properly. For example, part of the allure of this television for its price is the 4K-resolution capability. Unfortunately, the 4K settings do not consistently perform as they should for movies and games, so 1080p resolution is more consistent and realistic for this TV. 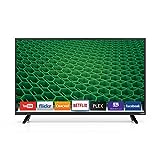 A lot of gamers who purchased this TV did so to use it as a monitor for their PC gaming setup. Out of the box, the TV is set on its vivid setting which emphasizes cool colors, especially blue. It also has a gaming mode which reduces motion blur and gives a great input response time. The dark room and calibrated settings are warmer and focus on more realistic coloring. The standard setting is even more cool and blue-centered than vivid.

And that’s not all

The computer setting is good for gaming along with the gaming setting. It reduces motion blur and judder and eliminates sharpness settings. The reduced-judder option is really most useful for sports and gaming. Though it is called a “reduced judder” setting, it should have the ability to eliminate judder altogether, but this is not the case. Other than that, the excess efforts towards clarity and overly enhanced feeling can actually make the picture look outdated and cheap.

The colors are vivid and very suitable for a gaming experience. It also successfully avoids black pixels looking too purple toned. Black pixels actually look black, even though the television has a glossy finish on the screen. However, there is not uniform brightness across the entire screen during viewing or gameplay. This is a common problem for LED screens. This should be reduced by the local dimming feature, but there are only eight LED zones so it really does not improve the contrast noticeably.

While the colors are impressive in gameplay from a straight-on view, viewing from a side angle will decrease the color quality and saturation by close to 20 percent. It is not very suitable for a large group of people to watch something from multiple angles. This is similar to the views of photos. Just because you can view your photos on the television does not mean that they will look good. The screen has a frame rate of 240Hz.

Although it has capabilities to connect to wireless internet, no internet browser is available with this TV. This is particularly problematic because it is connected to the Yahoo! app store which is quite limited. While it does come with many major streaming apps included automatically, it would be quite difficult to add additional apps if the desired app was even available.

This ultra-HD smart TV comes with a unique remote that includes buttons specifically for top-rated apps. However, many users did not like the remote because the buttons are very small, and there was no backlight. This makes it extremely difficult to use in rooms with low lighting. It is also difficult for some adults to use with such small buttons, and the size of the remote itself makes it difficult to keep track of.

It is close to impossible to beat this model of television on the price, but it is pretty easy for the VIZIO D40u-D1 to be defeated in performance.

This television has a 43-inch screen with 4K resolution. It has the same wireless internet capabilities, but even though the specs are the same the performance is better with the TCL according to reviews. It also has a one-year warranty and the same number of HDMI ports, which is three. 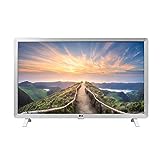 Another high-quality alternative TV we recommend is by LG. This 28-inch TV features a resolution of 1366 x 768 to provide detailed 720p images. LG designed this product for the modern person, and that’s why it only takes 8 ms response time for the images to load. All pictures continuously refresh at 75 Hz to eliminate a blurred picture and promise to keep up with fast-moving objects.

We love the white frame surrounding this TV as you typically find technology comes in black these days. It’s sleek and modern to allow it to match a bedroom, living room, or small apartment perfectly. There’s something cozy about its frame with the rounded edges. You can easily mount the TV to a wall via the rear panel, thanks to the screw holes that are already in place when you purchase this.

We’ve spoken about the images being crystal-clear, but there’s a significant emphasis on color quality, and that’s all thanks to the Triple XD Engine. This impressive technology ensures all colors are vibrant, with deep contrasts to enhance your viewing experience. LG also designed this TV with two picture modes so you can watch movies, sports, games and more shows.

Picture quality is important, but so is audio quality. Fortunately, this TV makes a great comparison to VIZIO D40u-D1 because the smart audio is incredibly clear. This TV also comes with built-in speakers to ensure everyone in the room gets an equal listening opportunity.

It cannot be ignored that quite a few people are very pleased with their purchase of this TV. For them, it appears to be a great deal well worth the risk. However, the statistics are not very impressive.

A fair recommendation of this TV would definitely be to choose another option. For similar features and much better quality at a very similar price, the TCL43S405 would be a much better choice. The LG 28-inch HD Smart TV Monitor is a little more of a splurge, but also more worth the money than the VIZIO.

Sceptre TV Review: A Clear Picture for Your Entertainment Needs