The plasma television's all-too-brief tenure as the top of the TV heap reminds us of this quote from Blade Runner. Tyrell tells Roy, “The light that burns twice as bright burns half as long — and you have burned so very, very brightly, Roy.” The plasma TV, which had its heyday in the early 2000s, was the Roy of the home theatre experience. It featured brilliant colors, vivid contrast, and deep, dark black levels. It also weighed roughly 497 pounds.

That's hyperbole, of course, but for as superior to LCD TVs as plasma TVs were, they were also bulky, heavy, and expensive. As society continues hurtling toward sleeker, thinner, and lighter everything, plasma TVs were edged out by increasingly slender, and increasingly better-looking LED and OLED TVs. Plasma TVs were ultimately discontinued altogether in 2015. Now, those lithe LEDs and OLEDs rule the roost.

If you're looking to replace your old plasma TV, or if you simply want to replicate the plasma experience, use this guide to help you decide which modern TV may fill that plasma TV-shaped hole in your entertainment soul.

How Do Plasma TVs Work?

Plasma TVs use glass panels filled with millions of minute cells. These are chocked full of a mixture of inert gases. When electricity hits these phosphors, they light up pixels in the TV's screen. These glass panels and independent pixels account for the plasma TV's superior color and contrast, as well as its considerable weight.

What's the Difference Between an LED TV and an OLED TV? How Did/Do They Compare to Plasma TVs?

OLED, or organic light-emitting diode, TVs combine the best (and a little bit of the worst) of plasma and LED TVs. These TVs are thin and have independent pixels like a plasma TV, which means they have a slim profile and can display brilliant colors and deep blacks. They're also lightweight and consume less energy, just like LED TVs. On the downside, OLED TVs don't generally last as long as LED TVs, and they can also be subject to both dead pixels (like an LED TV) and burn-in (like a plasma TV).

What's the Difference Between HD and 4K Resolution?

In short, HD is the present and 4K is the future. High-definition TVs have 1920 x 1080 resolution, which means their screens are made up of around two million pixels. An ultra-high-definition TV, aka a 4K TV, boasts eight million pixels, with a screen resolution of 3840 x 2160. While the difference between a 4K TV and an HDTV isn't as mind-blowing as the difference between standard-definition TV and HD, it is considerable. The bigger the TV, the better 4K looks, too, and TVs certainly aren't trending tinier in 2018.

While there isn't a ton of television produced in 4K at present, it's on the rise. (Many video games are already there). All of the TVs in this guide sport 4K resolution, further suggesting that just as the Blu-Ray replaced the DVD, 4K will ultimately replace HD and become the industry standard.

At a minimum, a smart TV has built-in WiFi and can go online to access the most popular streaming services like Netflix, Hulu and Amazon Prime. Many smart TVs can also download a slew of other apps (if they don't come packaged with them already) and a web browser. The smartest of smart TVs also recognize voice commands. Several of the TVs on this list have Google Assistant onboard, for example. Many of them are compatible with Amazon Alexa, as well. TVs that aren't smart – let's call them traditional TVs – can easily be hooked up to standalone media players such as Roku, Apple TV, an Amazon Firestick or Google Chromecast to add streaming capabilities.

This list uses a 65-inch screen as a baseline to level the playing field and make price comparisons practical. All of the TVs included feature LED or OLED displays. In populating our list of potential plasma successors, we examined the following criteria:

Each of the TVs in this guide performed well in most or all of these categories. We paid special attention to color, contrast and black levels, given that those were plasma TVs' strongest selling points.

The 7 Best Plasma TV Alternatives in 2018

The Sony XBR65A84 boasts deep blacks and vivid details, thanks to its 4K HDR Processor X1 Extreme that processes images in real time and upscales what you watch. Sometimes, the X1 Extreme replicates 4K HDR; other times, not so much. The colors on this OLED TV remain consistently brilliant, thanks to its Triluminos display, which has an extensive color palette and 4K HDR Super Bit Mapping. All of that tech combines to create a far-reaching range of tones and shades.

One of the XBR65A84's most interesting features is its Acoustic Surface sound technology. Sound emanates from the entire screen. While it's an improvement over watching the latest engine-revving, chrome-crashing, Vin-Diesel-growling installment in the Fast and Furious franchise with a standard set of TV speakers, for optimum home theatre sound, you're still better off hooking up your own receiver and speakers.

The Sony XBR65A84 comes with a limited 1-year warranty and is compatible with Alexa.

If your inner George or Jane Jetson dreams of controlling the entire house using just the dulcet tones of your own voice, the LG 65SK9500PUA Super UHD TV with AI ThinQ (say that 10 times fast) might be the TV for you. AI stands for Artificial Intelligence, and this feature-filled OLED TV has Google Assistant built in and is compatible with Amazon Alexa, too.

An a7 Intelligent Processor and Nano Cell Display combine for heightened 4K HDR capable of over 1 billion colors. The picture is bright, and the colors are brilliant. Some users have reported edge bleed and haloing, however. The 65SK9500PUA tries to bring the movie theatre experience home with Dolby Atmos sound, which sounds great — at least for built-in speakers.

It comes with a 1-year warranty. 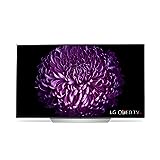 This 2017 version of the LG OLED65C8PUA snags a spot on the 2018 list thanks to its pixel-perfect color depth and slender, glare-free screen. Blacks are deep and dark; hues pop, thanks to the 4K OLED display's Active HDR with Dolby Vision. Built-in Dolby Atmos sound works hard to imitate the surround sound you'd find at the theatre or with a proper set of surround sound speakers.

The LG OLED65C7P comes with a 1-year warranty.

When is a TV not a TV? When it turns into a literal work of art. The Samsung UN65LS003AFXZA, aka The Frame, is an LED TV that doubles as a natural-looking framed painting or photo — the choice is yours. Turn off The Real Housewives of Omaha and turn on Art Mode just before your mother-in-law comes over, and she'll be greeted with your favorite Monet instead of an angry mother of five flipping over a table.

It's a rad gimmick, and that's the major downside with this TV: it's a little gimmicky. The Frame comes with a curated, 100-piece art gallery and the option to buy more art for your virtual collection. You can also display family photos alone, or in a collage, with a variety of simulated mattes. The TV itself has adequate color and sound, and that's probably good enough: the aesthetics are what really matter with this unique take on a flat-screen television.

This 2018 update of the LG OLED65C7P takes that already-stellar OLED TV and improves upon the output with its a9 Intelligent Processor, which produces even sharper pictures. Is it a huge, brain-melting difference that'll blow your retinas out of your eyeholes? No, but it is noticeable if you're looking for it, and it is something to consider as you future-proof your home theatre. Both TVs are excellent, but if you have the funds in the bank for the OLED65E8PUA, the most recent version of this smart TV is likely the smart call.

It features a 1-year warranty.

The LG OLED65C8PUA is the current star of the LG OLED TV lineup. Given that LG is the world's bestselling OLED brand, that's a nothing to sneeze at. This OLED stunner has 8.3 million individually-lit pixels; that means sharp details, rich hues and practically flawless blacks.

All this pixel precision is powered by an a9 Intelligent Processor that's packed inside LG's ThinQ ultra-slim cinema screen, which is big on color and slender on space. Part of the AI line, it has the Google Assistant built in and is compatible with Amazon Alexa, just in case you can't decide between robot butlers.

The LG OLED65C8PUA features Dolby Atmos sound and Dolby Vision support, and it comes with a 1-year warranty.

If you stay up at night writing love poetry to the deep, intrepid blacks of your old plasma TV, Sony's XBR65X900F LED TV is a solid stand-in. Its X-tended Dynamic Range PRO technology offers up to six times the contrast of a standard LED TV for the boldest blacks around. Its brights are brighter, too, with a vivid Triluminos display and X-Motion Clarity that keeps the action — whether that's game seven of the NBA finals or Jason Bourne beating up some thugs who deserve it — crisp and full of contrast.

Like many of the other TVs on this list, the Sony XBR65X900F features Dolby Vision and comes with a 1-year warranty. It is compatible with both Alexa and Google Assistant.

The LG OLED65C8PUA is our top pick to replace your plasma TV. It features the high contrast, deep blacks and bright colors that a plasma TV would offer, and it presents them in a slim package with a sharp 4K OLED display and smart TV technology, including both Google Assistant and Amazon Alexa compatibility. Its onboard Dolby Atmos sound doesn't touch what you'll get with an old school receiver and speakers set-up, but it is a cut above similarly-priced OLED and LED TVs. This MVP of LG's world-class lineup is a little pricier than some (but not all) of the other televisions in this guide, but you get what you pay for. In the LG OLED65C8PUA's case, you're paying for a terrific centerpiece for your next Jean-Claude Van Damme movie marathon.