As the newest advancement in entertainment technology, media wear allows users to experience their own personal theater with a headset. The Avegant Glyph, a crowd-funded innovation that kicked off such gear, is slick and futuristic — but does it live up to the hype of revolutionizing the entertainment experience? 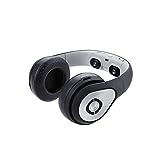 Is the Avegant Glyph the Perfect Personal Theater?

A number of cool gadgets have become available in recent years for people who want a more immersive viewing experience. Virtual reality (VR) devices like the Oculus Rift and the HTC Vive have broken ground in this respect but primarily serve VR gaming. The Avegant Glyph is marketed as a high-tech answer for audiences who want a more intimate movie-watching experience. This headset certainly looks like it belongs in the future — but does actually fulfill its hefty promise?

What Exactly Is the Avegant Glyph?

Though the Avegant Glyph resembles a VR headset, its manufacturers describe it as “media wear.” As you might surmise from the name, media wear describes devices that you literally wear, most often on your face or head. This specific product resembles headphones with a clunky band that can be worn over the head when utilizing the music-only function, but it is actually intended to be worn over the eyes. (Yes, it looks funny.)

However, it creates a unique experience — a video right in front of your eyes, with complete privacy. Many reviewers say this product is perfect for long flights and other travel.

The Avegant Glyph comes in neat packaging, which one reviewer praises as great forethought and design. The arrangement of the device in the box makes sense and flows naturally as you unpack.

Along with the headset, buyers receive a charging cable with micro USB, a USB type C adapter for the Retina MacBook, a cable for mini-HDMI/HDMI, a user manual and a carrying case. The package also contains four nose bridges that magnetically attach to the headset for added comfort and a suede cover for the optic lenses to prevent scratching during storage.

It’s necessary to adjust the headset for maximum comfort and effect. To this end, the nose bridges have slightly different shapes and sizes to accommodate customers’ features, and the headband itself is also adjustable.

Once the device is settled on your face, it’s time to adjust the optics. They actually sit inside the headband and require deployment to the viewing position, which you do by clicking a button in the band. Then you have to align the lenses with your eyes by using the interpupillary distance sliders found on the top of the device. Finally, you need to focus the lenses until the image is crisp and clear. Reviewers applaud the focusing capabilities, as they enable viewers who need corrective lenses to watch without having to wear their glasses. Once you’re focused, it’s advised you attach the provided head strap to the two headphones to improve stability and take some weight off the nose bridge.

The adjustments can be time-consuming, and one reviewer had to fiddle with the device for nearly 30 minutes before he was satisfied. Adjustments may also have to be re-done during viewing if the device starts to slip down your nose or otherwise moves. Some reviewers find this inconvenience a big pain, but others are willing to trade adjustment time for the subsequent experience.

The biggest difference between the Avegant Glyph and previous media wear is how the device gets the images to your eyes. Avegant has dubbed their innovation Retinal Imaging Technology, which essentially eliminates the need for a screen. Instead of presenting colored pixels the way the Oculus Rift does, the Avegant Glyph projects LED lighting onto two million microscopic mirrors, a technique called digital light processing (DLP). The light then reflects into the user’s retinas, allowing the image to be seen.

This new technology appears to resolve one of gamers’ biggest complaints about VR headsets: the dreaded “screen door effect,” when the lines between pixels are visible. Since there are no pixels, there are no lines about which to worry. Business Insider, after hearing about the technology, checked with a professor of optometry to see if this was potentially damaging to users’ eyes. The answer: it’s not. It actually replicates natural sight.

What Are the Specifications?

The Avegant Glyph resembles large headphones. One reviewer compares them to Beats by Dre, although the headband is significantly thicker.

The product is heavier than traditional headphones, weighing nearly a pound. This can lead to some discomfort if worn for a long time, especially on the nose, where the nose bridge may leave an indent or red mark. One reviewer says he finds resting his chin against his chest to be the most comfortable position, but if you intend view 360-degree media, you may notice the weight more acutely.

Let’s start with the most important aspect of any viewing device: image quality. The Avegant Glyph runs in 720p, which the creators say is required for the technology. While falling short of the ever-popular 1080p found on HDTVs, this is still decent viewing quality, and no reviewers had any trouble with the image resolution.

The product also facilitates 3D content and has full-head tracking capabilities, which means that instead of using a mouse or controller to change the camera angle, you can turn your head. These features make it useful for VR games or first-person-view drone flying. (Yes, this is a real thing—it turns out there’s a whole community of drone racers out there.)

Many reviewers praise the audio quality, which is one of the selling points listed by the creators. As mentioned before, this product can be used strictly as headphones, although you’ll want to make sure you have the suede optics cover on to protect the lenses.

The device has a battery life of 4 hours when used in theater mode and much longer when used as headphones. You’re able to use it while charging, which takes about 3 hours total.

While the Avegant Glyph comes with an HDMI cable that works with a large selection of players (Blu-ray, DVD, PS4, Xbox, tablet, MacBook, lap top, PC, etc.), you’ll need a USB/HDMI to connect to a phone. Using the Glyph as headphones-only also requires an audio adapter cable.

The warranty lasts 1 year, which begins on the shipment date if ordered directly from Avegant, or on the purchase date if ordered from a retailer. This is a limited warranty, so it only covers factory defects. They also offer a 30-day refund policy. The scope of this warranty is disappointing for the price, but you may be able to buy additional coverage through a third-party retailer.

How Does It Compare to Other Media Wear?

Since the Avegant Glyph hit the market in 2014, several competitors have introduced their own products. While a number of devices try to appeal to gamers for VR use, the following products are mainly marketed as personal theaters. 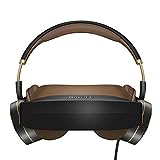 The Royole Moon 3D Personal Theater Headset is marketed as luxury experience. While the Moon doesn’t require the same level of adjusting as the Glyph, it doesn’t have the same level of comfort either. The exterior components are well-made, and the video and audio are high quality. However, reviewers complained about the unintuitive interface, which requires tapping and swiping on the headphones to select items on the menu. To top it all off, the warranty is limited to hardware and software defects for 1 year. 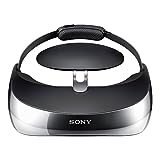 The Sony HMZ-T3W Head Mounted 3D Viewer has mixed reviews. The price is quite hefty, though users admit that the image quality is superb. Unlike the Avegant Glyph, which is designed with a smaller image to retain peripheral vision, the HMZ-T3W is described as having a TV right in front of your face. However, viewers who require corrective lenses may be disappointed that it doesn’t allow for more focusing and, as a consequence, requires them to wear contacts or glasses while viewing.

The device is designed for comfort, substituting the nose bridges common among these products for a series of head straps instead. This results in less discomfort but requires extensive adjustments. The warranty is, again, 1-year limited.

The VUZIX iWear Video Headphones are certainly more affordable than the other products listed. However, they have several limitations that frustrated reviewers. For example, instead of providing a USB port and cable, an HDMI cable is connected directly to the headset. Users note that the attached cable isn’t compatible with mobile phones.

The VUZIX iWear Video Headphones are characterized as lighter than traditional VR headsets, if still unwieldly. Reviewers who used it for gaming find it well-suited in that regard. The video and audio are also praised as high-quality, and the device supports 3D and head tracking. The warranty is only 30 days but covers a complete refund when returned for any reason.

What Are the Pros and Cons?

The Avegant Glyph is an expensive piece of technology, and its value varies by user and intended purpose. That said, we’ve compiled three major pros and cons to consider.

Design: Great care was put into designing the Avegant Glyph to ensure the customer received a high-quality experience. While there are undeniable flaws, the thought evident in the product’s delivery, down to the packaging, is impressive.

Peripheral Vision: Individuals seeking to escape reality may consider this a defect. However, every reviewer still found their experience immersive — once they were focused on the images, the rest of the world faded away. However, if they needed to engage with reality, whether to use their phone or simply look around, they were able to. Of all the devices researched for this review, only the Avegant Glyph offers this.

Immersion: As mentioned above, users were astounded by the level of immersion. Setting aside any qualms about looking silly, this device facilitates a uniquely engaging experience for both video and gaming. How much one values that engagement varies by user, but for individuals looking to experience the next level of entertainment, the Glyph delivers.

Nausea: Despite access to outside visuals while wearing the headset, the Avegant Glyph runs into a common complaint among immersion-centered headgear: nausea. Endurance seems to vary by user, ranging from 1 hour to over 3.

Brightness: The consensus among reviewers is that the brightness is too high, even when set on the lowest setting. This contributed to some eye fatigue and afterimages.

Cost: Even with the drop in price, is still pretty expensive, especially when there are alternatives out there for around a hundred bucks.

Is It Worth It?

Is it worth it? Well, that depends. This device was created specifically for entertainment enthusiasts who dream of being on the frontier of media advancements — if you’re excited about the progress of 3D technology or follow developments in VR gaming, this device is meant for you. Can more casual consumers find value in this product? Of course. Some individuals may even find they are more engaged in media because of it. But the level of value users find in this product appears to be tied to their investment in entertainment.

The Avegant Glyph is well-made in terms of both hardware and software and makes great use of the technology currently available, like head tracking and image focusing. While there are obvious flaws, it’s important to remember that this product, and media wear in general, is in the beginning stages of development. In the coming years, audiences are likely to see further innovation and refinement. For what it is, when it is, and for whom it’s meant, the Avegant Glyph is an impressive product with a bright future.