If you are looking for a new TV, chances are you are searching for a 4K UHD TV to provide you with the best viewing experience possible. A better resolution means a better quality picture, and isn’t that what everyone wants when they’re watching TV? Unfortunately, a better resolution often means a much higher price tag.

If you are looking for a 4K television that doesn’t break the bank, Vizio offers some excellent 4K TVs at a great value. Two of Vizio’s popular television series are the Vizio D Series (the D stands for dependable) and the Vizio M Series ( the M stands for modern).

At a brief glance, these two TVs might appear to be very similar. If you are interested in buying either a Vizio D Series or a Vizio M Series TV but aren’t sure how they are different, then continue reading this guide. We’ll show you the similarities and differences between Vizio's D Series vs. M Series and help you determine which one is best for you.

A 4K TV is a television that offers the highest resolution that is currently affordable for the average person. 8K televisions do exist, but they are not presently cheap enough for most people to reasonably purchase, although Samsung claims to be working on an 8K series that will be coming out in the near future.

4K UHD televisions, like the Vizio D and the Vizio M Series, have a resolution of 3840 by 2160, which allows screens to display about 8 million pixels. This is about four times the amount that a 1080p screen can show. 4K TVs offer a better viewing experience by providing a crisper, less pixilated image.

Many other companies are now selling technology that is compatible with a 4K TV. Many streaming networks, Blu-Ray Discs, streaming devices and gaming consoles are able to produce 4K content. Without a 4K TV, you would not be able to take advantage of this technology.

Vizio is an American electronics company that is known for its televisions and sound bars. In fact, it is the leading HDTV and sound bar brand in America. Vizio is known for selling high-quality 4K smart TVs for a lower price than most other TV companies. It currently offers five different TV series with the cheapest and most basic being the D Series and the most expensive, advanced series being the P Series Quantum. The M Series lies in the middle of Vizio’s five TV series. No matter what your budget or needs, Vizio is sure to sell a TV for you at a price you can afford.

What Is Vizio SmartCast?

Many smart TV companies choose to partner with different streaming device companies to make their interfaces more convenient for their customers. Vizio uses its Vizio SmartCast Operating System for its smart TVs by designing them with Chromecast already built in. The TVs come with SmartCast preinstalled with a few major streaming apps that are displayed on the home screen of the TV. There will also be featured shows and movies on the top of the homepage.

However, the real magic of SmartCast lies in the Chromecast component that allows you to watch whatever is on your phone on your TV’s screen by simply pressing the cast option on your phone. Unlike other streaming devices like Roku or Amazon TV, Chromecast does not require a remote. You simply need to download the free Vizio SmartCast app on your phone to control your TV and cast content onto your television. 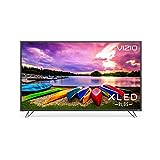 If you like a TV with a very thin bezel, you’ll love the design of the Vizio M Series TVs.  The border around the screen is a sturdy metal material that is only one centimeter thick. From the side, the maximum thickness of the TV is 6.1 centimeters. Although the 2017 version of the Vizio M Series had a wiry, odd-looking stand, the new 2018 version has a much better-looking stand that is a sturdier aluminum material and black like the rest of the TV. The back of the TV is plastic. Overall, this TV looks great.

The M Series TVs only come in larger sizes ranging from 55 inches to 70 inches. The inputs are placed toward the side of the TV, making them easy to access, but there is no type of design plan for helping with cable management. 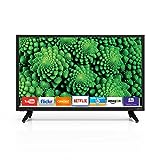 The bezel on the Vizio D Series TVs appears much larger than the bezel seen on Vizio M Series TVs. The border around these televisions is 2.1 centimeters and is made from plastic. The maximum thickness of this television is 8.5 centimeters, giving it a thick appearance. The stand on this television is black plastic like the rest of the TV. It may wobble a bit if nudged. This TV has a cheaper appearance than the M series and is thicker, so it will stand out more if mounted on a wall.

The Vizio D series TVs come in both small and large sizes ranging from 24 inches to 70 inches. The inputs are on the side and the bottom of the TV, so they are easy to access. Like the M series TVs, the back is plastic, and there is no design plan for cable management.

The Vizio M Series has excellent picture quality. It has a good native contrast ratio of 4598:1. This TV is equipped with full-array local dimming, which is better than edge-lit dimming; however, the local dimming needs some work. There is some clouding on the screen when objects move, which can be very distracting. This TV has an average amount of dimming zones with 32 on the 55-inch, 40 on the 65-inch, and 48 on the 70-inch.

This TV has better than average brightness that looks good in both dark and bright environments with a peak brightness of 600 nits. The TV has pretty good anti-reflective abilities, so you can enjoy watching TV in brighter rooms. However, the Vizio M Series screen does not maintain good brightness or color at an angle, so it is not ideal for wide seating arrangements. The black uniformity on this television is great with no clouding, but the gray uniformity has notable clouding and with darker edges.

The Vizio M Series has great color accuracy and gradient. When this TV first comes out of the box, it already has very good color accuracy, but after calibration, it is basically perfect. However, these TVs don’t have a wide color gamut, which results in less vibrant colors. This TV has a VA Panel, which prevents any temporary image retention or permanent burn-in risk.

For the most part, the Vizio M Series TV handles motion well. There is some apparent stuttering during wide shots. Also, this television does not have motion interpolation or any variable refresh rate technologies. The 4K on this TV functions without a problem and supports both HDR and Dolby Vision.

The Vizio D Series also has very good color accuracy and decent color gradient. This TV also does not have a wide color gamut, resulting in worse overall color volume. There is also a VA panel on this TV that similarly prevents temporary image retention and permanent burn-in risk.

This TV does not handle motion as well as the Vizio M Series does. In addition to not having motion interpolation or variable refresh rate technology, the Vizio D Series does not have black frame insertion. The 4K and HDR on this television are great, but it does not support Dolby Vision.

Both the Vizio M Series and the Vizio D Series are smart TVs that run off of Vizio’s SmartCast operating system. The interface for these smart TVs is very basic and has few applications that include Netflix, Prime Video, Hulu, YouTube, VUDU and several other streams. These apps are preinstalled, and there is no app store to buy more apps from.  You also can’t rearrange these apps to have your favorite streams listed first. Many people are not fans of the Vizio SmartCast system and prefer other smart TV operating systems.

SmartCast uses Google Chromecast’s technology, which allows you to watch more content on your television by allowing you to cast different compatible apps onto the screen. You can cast videos, photos, TV shows, movies and more onto your TV using this method. You don’t even need to change the input to cast onto the TV. Chromecast will require some setup, but after that, you will be free to start casting content onto your TV without even needing to use a remote.

The Vizio M Series and the Vizio D Series are both compatible with your Google Assistant or your Amazon Echo. You can ask Alexa or Google to control your TV by turning it on and off, change inputs, pause or play content, or even to cast content onto the TV.

Pros and Cons of the Vizio D Series

Overall: The Vizio D Series TV offers great 4K viewing for small televisions. Although this TV is lacking in some important features, it offers a decent picture for an extremely low price.

Pros and Cons of the Vizio M Series

Overall: The Vizio M Series offers a great performing 4K television for a great price. Although there are a few areas where this TV is lacking, it looks great and performs well.

However, for a lower price, you can still enjoy 4K viewing on the Vizio D Series. If you need a smaller TV to act as a monitor for your computer or console, the 24-inch Vizio D Series televisions and other small models are a great choice.

What Does A TV Producer Do? Bringing Your Favorite Shows To Life

How To Hide TV Wires: Our Comprehensive Guide